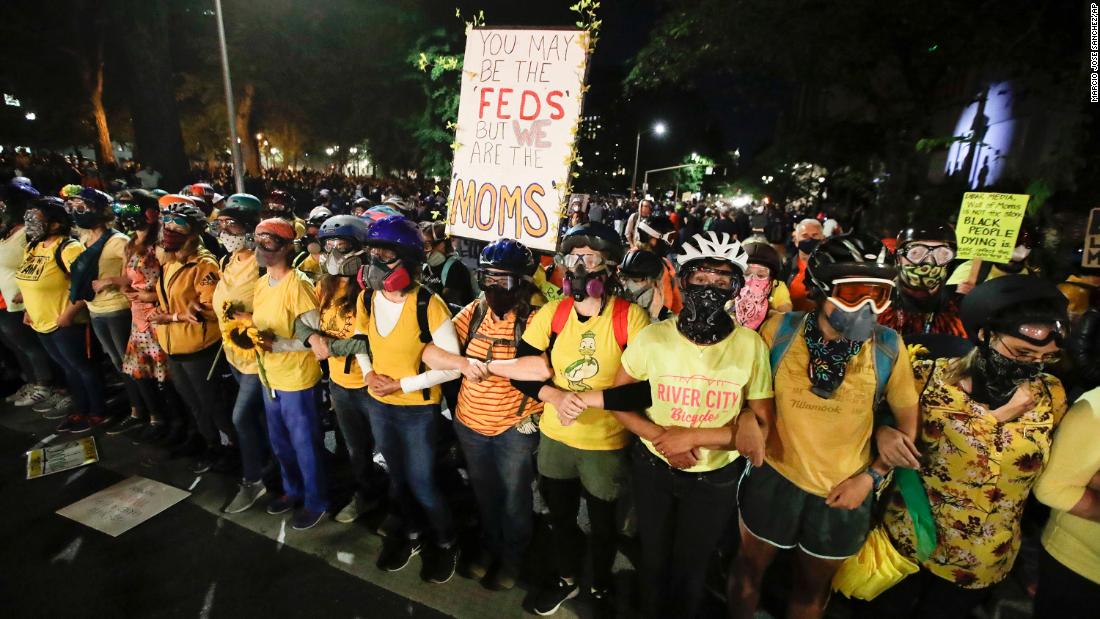 A lawsuit filed Monday by the “Wall of Mothers” does not shoot from Portland and several others, claiming that federal agents used violence to “eliminate peaceful and constitutionally protected protests” and that their presence as a federal internal security force is unconstitutional.

The lawsuit alleges that federal agents – some of whom “are not prepared for mass protests protected by the First Amendment” – were used to quell demonstrations and “betray the fundamental tenet of American democracy.”

CNN contacted the Department of Homeland Security, which reports to the Federal Security Service, and the U.S. Marshals Service for a response.

Wall of Mothers, Don’t Shoot Portland and Other Protesters Have been subjected to tearful, illegal arrests for no apparent reason and shootings with rubber bullets and bean bags at close range by school agents wearing military exhaustion and equipment that repeatedly leads to injuries. . The tear gas left some vomit and could not eat or sleep, according to the suit.

“They were forced to speak and gather, fearing not just injuries but the possibility of sudden arrest without a probable cause,” the statement said.

Videos have appeared showing authorities without identification in unmarked vehicles arresting protesters in Portland. These cases prompted an American lawyer to call for an investigation into the case.

The local leader did not welcome federal involvement in the protest.

On a tweet night Monday, Portland Mayor Ted Wheeler called for an immediate meeting with DHS leadership, “to discuss a ceasefire and the elimination of reinforced federal forces.”

Wheeler came under close scrutiny by Trump and acting DHS Secretary Chad Wolf after weeks of protests in his hometown.

Ahead of July 4, the Trump administration sent teams of federal agents to the city – the president said that the efforts were to protect federal property, but protesters said that the action itself caused public outrage.

Over the course of several nights, mostly peaceful protests demanding racial justice and an end to the influx of federal resources into the city became violent as a small number of riots ignited fires and set off fireworks in the city’s central federal chamber. The problem has led Portland officials and members of the Trump administration to launch a public war of words over who is to blame for the insurgency.

Wheeler was asked if he was in contact with the acting DHS secretary.

“I have no reason to turn to him,” Wheeler said at the time. “My demands are clear. I want them to go.”

But Acting Secretary of Homeland Security Chad Wolf told Fox News that he accused the city’s leadership of creating an environment that allows criminals to avoid touching.

“They are armed with rocks, bottles, baseball bats, power tools, commercial-grade fireworks, causing this violence and directing it to violence in federal courts and federal law enforcement,” said Wolff of Portland.

“I offered DHS support to help resolve the situation in Portland on the ground, and their only response was: please pack up and go home,” Wolff told Fox News. “It just won’t happen on my watch.”

Since Thursday, federal officers have made 22 arrests

The U.S. Attorney’s Office says officers protecting the federal courthouse in Portland were “exposed to nighttime threats and attacks by protesters in the line of duty.”

Crowds of several hundred people gathered outside the federal courthouse on Sunday and “spent hours shouting, chanting, pounding on the fence and throwing objects at it,” according to a statement issued by the Portland Police Bureau early Monday morning.

Federal officers have arrested 22 people in Portland since Thursday night, according to a press release from the Department of Justice.

Most of the arrested people are accused of attacking a federal officer, but one suspect is accused of illegally operating a drone. Another is accused of “persecuting federal officials” by allegedly docking members of the Federal Defense Service, which involves investigating and publicizing a person’s private information.

Andy Rose and John Pasantino of CNN participated in this report.